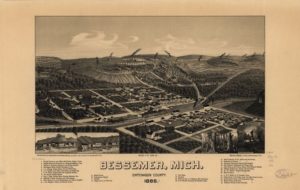 The photo on the left (from the Library of Congress) is a panoramic view of Bessemer in 1888. The railroad is shown through the middle of town. The smoke in the distance is from area iron mines. 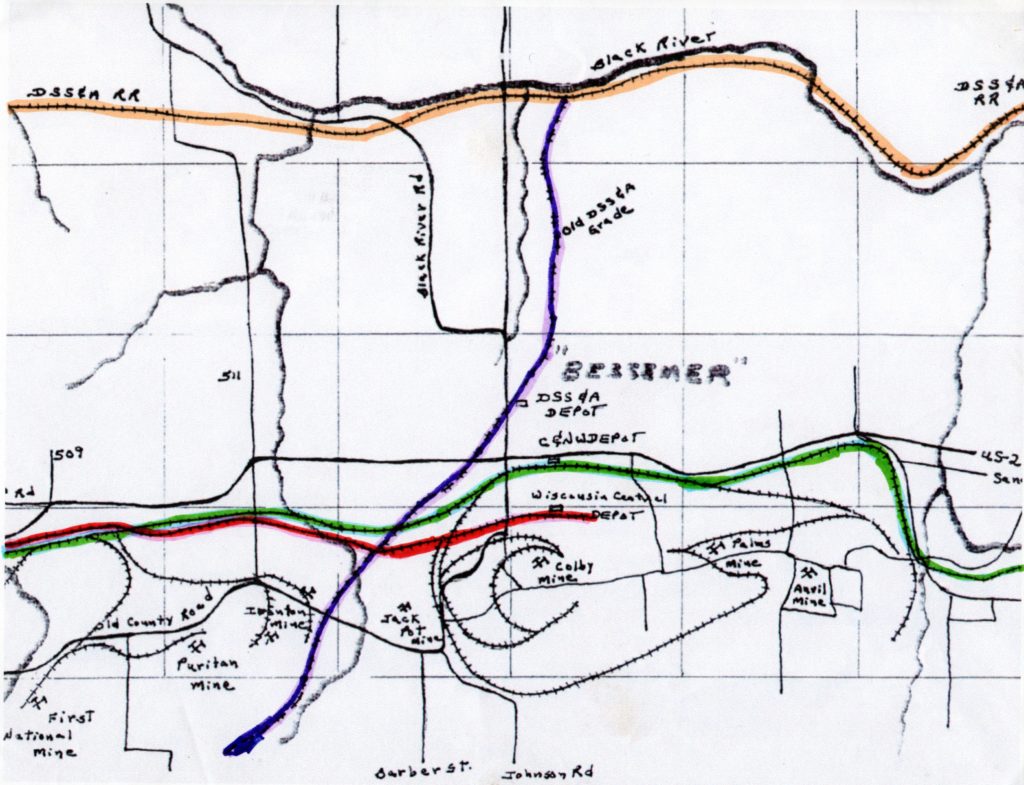 The drawing on the right by J 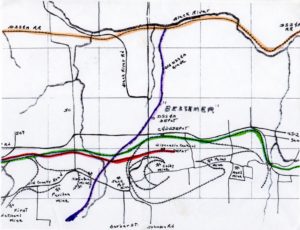 im Rouse shows all 3 railroads, the 3 railroad depots and their spurs to the mines in Bessemer.  Jim obtained a collection of maps called DSS&A Ry Profile Maps - 1907 .  With Jim's permission Dennis Rolando was allowed to copy the map for the Bessemer Area Historical Society.  It shows the Wisconsin Central (later know as the Soo Line) tracks and its depot on Colby Street.

The Chicago & Northwestern Tracks and its depot on the corner o f Lead & Sophie Streets and all its spurs to the various mines of Bessemer.

The map also shows the Dululth, Soth Shore & Atlantic Railroad passing through North Bessemer with its line going south to a depot on north Moore Street. It extended south across the Powder Mill Creek into the Ironton Mine area in Yale Location with plans to extend to the iron mines in the Ironwood area and beyond.

In 1887, the Penokee Railroad began construction on a 26 mile route between Mellen Wisconsin and Hurley.  At the same time, the Gogebic and Montreal River Railroad built seven more miles to Bessemer where the line would end. This short branch line became a part of the Wisconsin Central Railway in 1888 who upgraded it considerably in the late 1890s. The intention was to connect a mainline to an iron rich area and create a connection for the flow of iron.

The prospectors on the Gogebic Range experienced the hardships of a land devoid of roads. Supplies were packed overland or brought by boat from Ontonagon to Ashland to the mouths of the Montreal and Black rivers. However, soon after the opening of the range for mining, the railroad made its initial entrance. With the fabulous riches of the Gogebic Range becoming more well-known, the railroad companies diverted their original plans and extended the railway line into the new mining district during the summer of 1884.

People traveling to the U P from Detroit or Lansing or ore leaving the U. P. came and went through Wisconsin.

The first ore from the range came out of the Colby mine. 1,022 tons were loaded onto flat cars in October of 1884, sent to Milwaukee, and then shipped by barge to Erie, Pennsylvania. By 1910, three separate railway lines served the Gogebic Range, and approximately four million tons of iron ore were being shipped annually.

Bessemer was settled around 1880 after ore was discovered at the nearby Colby Mine. In 1884, the Milwaukee, Lake Shore & Western railroad (later C&NW) came to town making transportation of ore economical. Bessemer became a village in 1887 and a city in 1889.

Read more:  The Railroad Comes to Bessemer by Ed Sandene

Timeline
1880 - Bessemer is settled after ore is discovered at the nearby Colby mine.
1884 - The Colby mine is sunk southwest of Bessemer, reaching a depth of 1,750 feet). It is closed in 1894
1884 - The  Milwaukee, Lake Shore & Western (MLS&W) railroad reaches Ironwood from Watersmeet. This company becomes the Chicago & Northwestern (C&NW) in 1893.
1884 - Ramsey, southeast of Bessemer is settled with a saw mill located there. The town was originally called Ironville.|
1884 - The MLS&W builds a 1.8 mile branch line to the Colby mine. (Pulled up in 1887).
1886 - The MLS&W builds a spur to the Peterson Mine. This line is extended 1/3 mile in 1950. They also build a spur to the Ironton Mine in 1886, and extended to the New Davis in 1890. This branch is removed in 1941
1886 - The MLS&W builds a spur off the New Davis Mine spur to the Puritan Mine. They also build a mine off this spur to the Newport Mine.
1887 - The WC also builds a 3.5 mile spur off their main line at Bessemer to the Palms Mine. They build a 1.9 mile spur off of the Palms Mine spur to the Colby Mine and a 1.4 mile "switchback" to handle the hilly terrain.
1890 - The MLS&W builds a spur from their main line to the Eureka Mine, about 1.1 miles long. The mine produces ore until 1950. It was north of Ramsey.
1890. The C&NW Bessemer Station was at US-2 and Sophie Street and was built in 1890.
1893 - The MLS&W becomes the Chicago & Northwestern railroad.
1893 - The nationwide Panic of 1893 reduces iron ore sales and production for several years.
1896 - First Street Railroad Bridge. This bridge was also constructed by the Wisconsin Bridge and Iron Company in 1896. It is 8' wide and 195' long. It consists of three spans resting on two steel piers and concrete abutments. The two approach spans 45' and 60' in length are steel deck girders while the main span is 90' in length and is a steel Pratt pony truss.
1899. Mine Street Railroad Bridge. The Wisconsin Bridge and Iron Company constructed a three-span railroad bridge here in 1899. It is 10' wide and 100' long, resting on two steel piers and concrete abutments. There are two steel deck girder approach spans, each 25' long and a single steel through-plate girder span 50' long. The bridge still exists (without the railroad).
1903 - The C&NW builds a spur from the Davis Mine spur to the Royal mine and the Geneva Mine.
1909 - The Wisconsin Central becomes the MStP&SSM, or Soo Line.
1916 - The C&NW installs a short branch line to the Plymouth Mine in Wakefield.
1918 - The C&NW had telegraph operators here around the clock.
1918 - The C&NW builds the Anvil Mine spur from their main line to the Anvil Mine in 1918.
1918 - The C&NW builds a connection 4/10's of a mile in length, between the C&NW main line (at mp. 343.5 (0.2 miles east of Bessemer station) to the Soo Line.
1938 - The C&NW RR places watchmen on Sophie, Moore and Clayberg Street during the ore-shipping season.
1945 - The C&NW and MStP&P employ 55 yardmen and 20 trainmen in ore service, which is pooled.
1952 - The Plymouth mine spur is removed.
1955 - The C&NW spur to the Eureka mine is removed.
1961 - The Soo Line (WC) line from Mellon, Wisconsin ended at Anvil Mine
1965 - The Peterson Mine spur is removed, as well as the Puritan Mine and the Royal/Geneva mine spur.
1972 - The Soo Line Depot (behind city hall) was torn down for the lumber
1983 - The C&NW was torn down and a Dairy Queen built
At one time - Bessemer had a two-stall engine house as well as a sixty-foot turntable.

Timeline edited from: Michiganrailroads.com
More information can be found at the Heritage Center and The Bessemer Public Library. 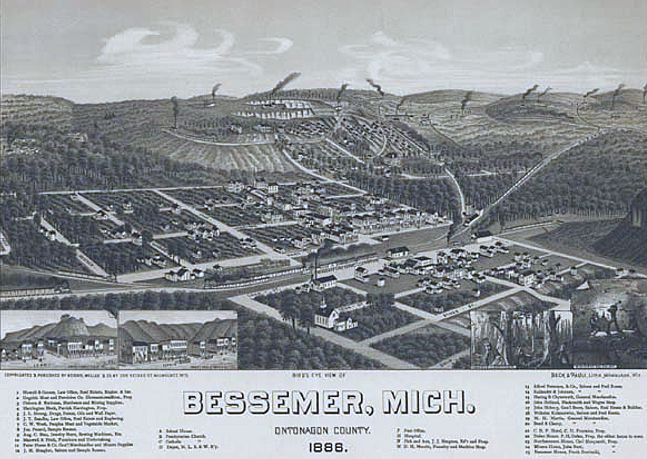 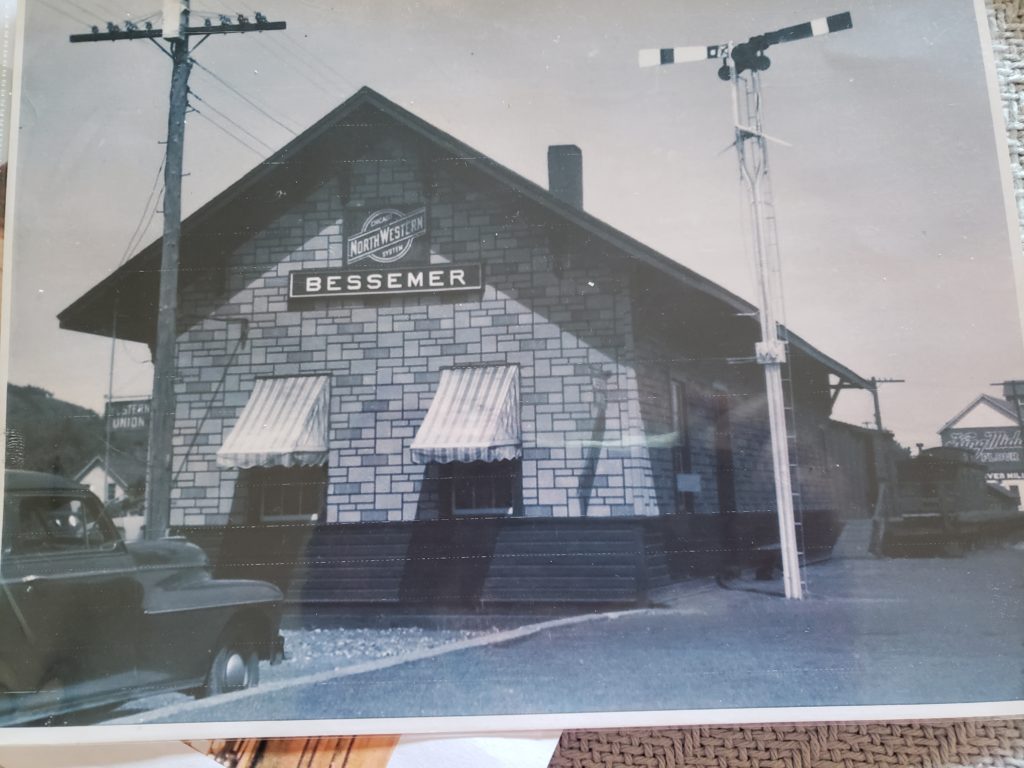 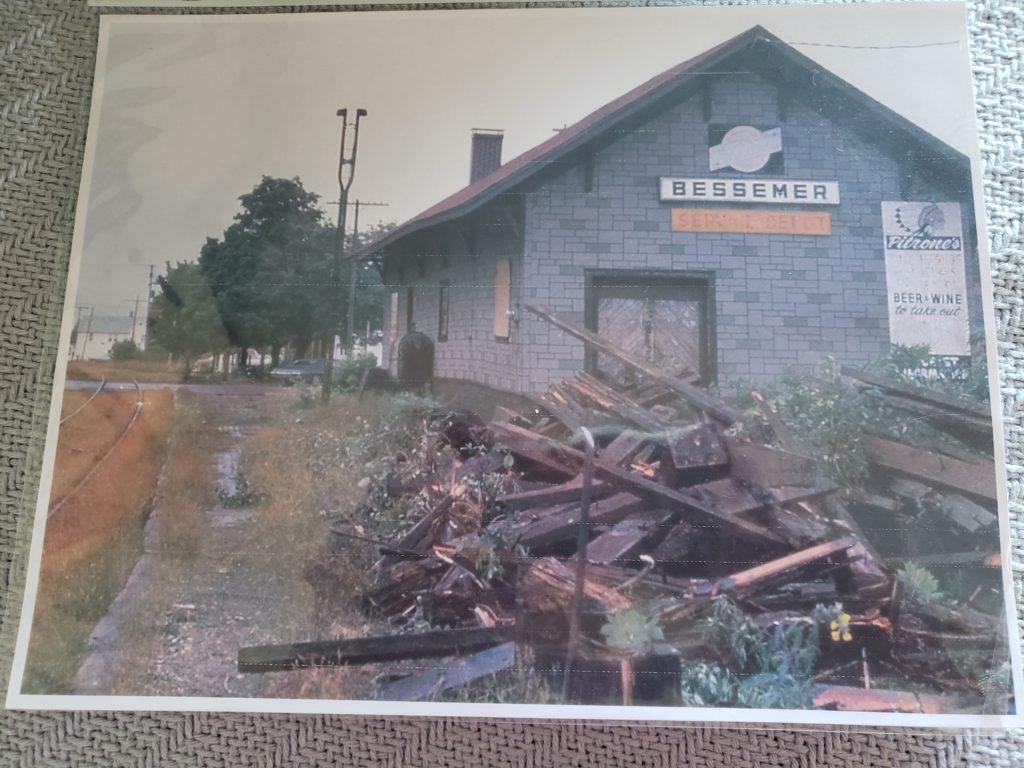 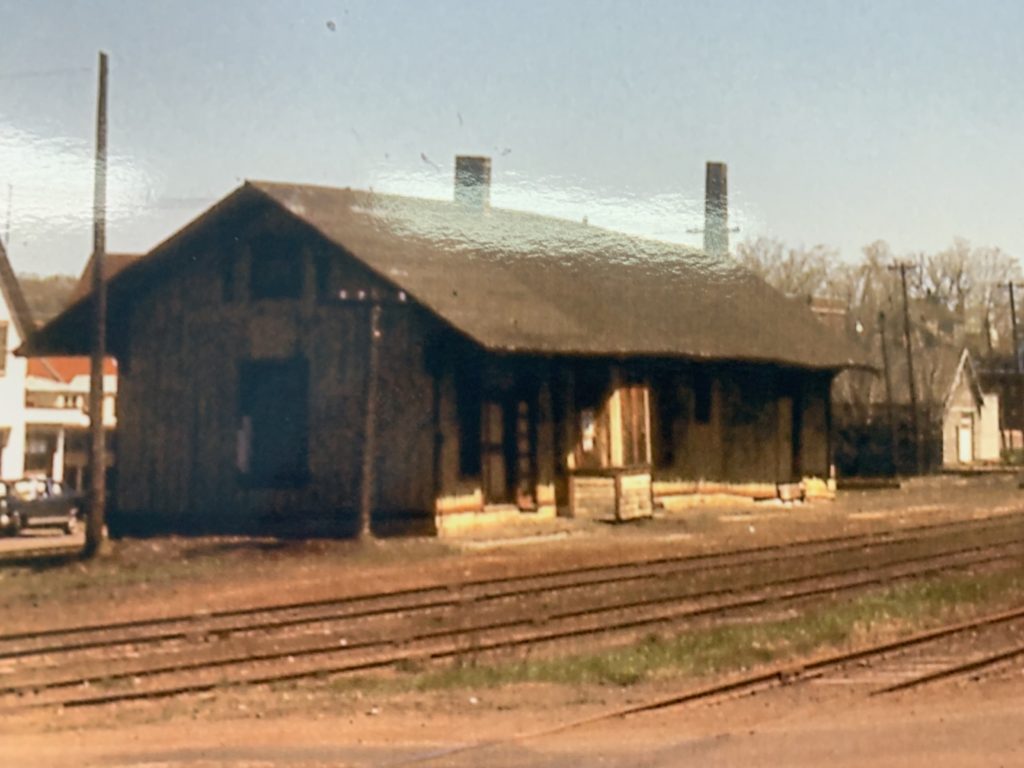 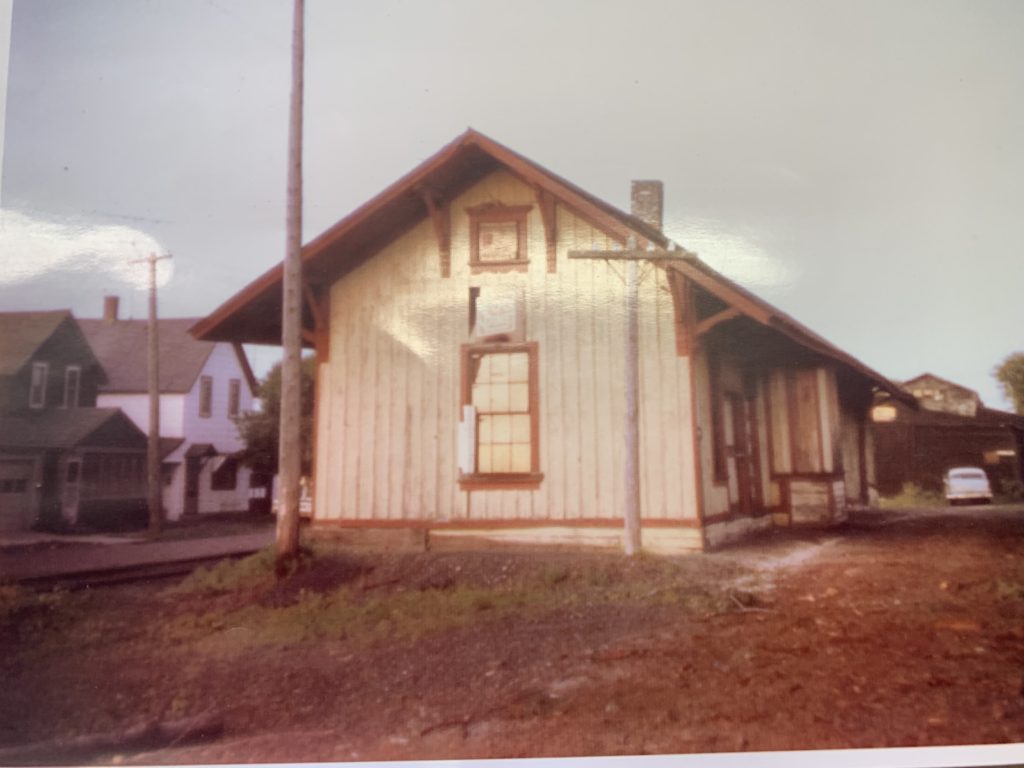 By Ed Sandene The discovery of Iron ore on Colby Hill sparked an interest in the area in many ways. Workers were needed to build homes and businesses in addition to working in the mines. This meant that people had to be brought to the area and iron ore had to be shipped to steel […]

The Empress of Ireland

By Ed Sandene The Empress of Ireland played a major role in mother’s life so it is fitting to mention a little bit of that part of the journey. This ship would remain in service only a few more years after mother crossed the Atlantic on it. The following story covers her journey and the […]